So 6 months done Down Under, how is it going? In short, great. Move away from everyone and everything familiar and you find out a lot about yourself and the world. And when that place is Melbourne, the isolation is amplified – you don’t just pop home for a quick “Oh its great to see you” when the plane journey there and back lasts almost as long as the 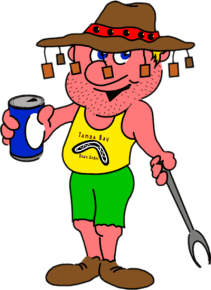 weekend. Aren’t I just such a pioneering adventurer, entering a brave new world? Sadly not, no.

What do you think of when you think Australia? Melbournians are all a bit like Shane Warne or Kylie Mynogue right? Love beer, banter and Brit-bashing, lying on the beach, going surfing and grilling shrimps on the barbie. Well yes…and no.  Certainly some Australians like playing sports but as many others like sitting on sofas. Students are generally laid-back, ‘fun’-loving yet surprisingly “deep”. Adult city-dwellers work 9-5, go out with the family on Sundays and yep, love a few beers. Sound familiar? That’s probably because (unless you’re the person in Lebanon who read my first blog) you live in a Western, English-speaking country too. In fact, Central Melbourne reminds me of Manhattan in so many ways its scary. There’s a Maccie Ds on every corner, department stores and tourists galore and a gridiron road pattern that only I can get lost in.

Also, Melbourne has got to be one of the most cosmopolitan cities in the world. Look around on campus sometimes and you would swear you’re in China and the average street in the central area is packed with sushi outlets and Asian supermarkets. Of course, the CBD and university area is always going to contain more immigrants than average, but it is still staggering. When people ask about culture shock, the obvious question is: which culture? I find the number of different possible flavours of instant noodle pretty shocking for a start.

So what am I saying? Coming to Melbourne is entirely pointless other than if you like paying £5 for a ham sandwich and getting eaten by snakes? No, that wouldn’t be fair – everywhere has a slightly different vibe and Australian civic culture has been shaped by the legacy of the British, the outback, the beach and the favourable climate in many interesting ways. You’ll meet great people and get a great tan. As a location for a year abroad its great. Indeed, Melbourne is the world’s ‘most liveable city’ and it shows – everywhere is very clean, there is an extensive transport system and the public services (see especially the toilets) are pretty top notch. But, as a holiday destination, could you get more cultural bang for your hard-earned buck? I would have to say yes. It’s a long way to go for an even more overpriced iced caramel latte. If you’re in London and it’s a change of scene you’re after, you’re better off going up North  – they do things differently there.